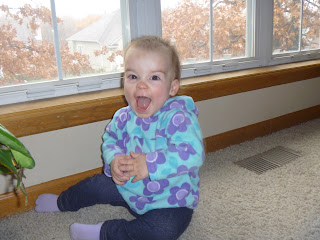 Our youngest granddaughter loves to talk to us on Skype.  She's 10 months old, and thinks that a computer conversation is a great way to spend time with her grandparents.  Apparently her mom tried to call us on Skype the other day while we were out and about, and the baby crawled over to the computer to talk to us, after apparently recognizing the familiar Skype sound.  She was disappointed we weren't there, but we got to talk a little later that day.

A lot of times, our daughter will set the laptop down on the floor, or on the couch, or wherever the baby is, so that we can see what she's doing.  She seems to think that we're right there, and will crawl around and show us stuff on the floor, read us a book, or just check to make sure we're watching.

It's a strange feeling of being "almost somewhere else" that I just don't get with a phone.  Maybe when people first started using telephones, they got that odd sensation of being two places at once, but I'm pretty used to phones, and don't think of them that way.  The computer conversation, though, definitely feels more connected.  I really feel in many ways like I'm sitting down with the baby, watching her play with her favorite toys, and letting her show us her books.  It's a wonderful feeling of connection, and if you aren't Skyping now, I'd highly recommend it.

We discussed afterwards that the baby is going to grow up completely used to computer conversations (or as we used to call them, TV Phones!)

We're thinking she'll be Skyping on her own by the time she's three, calling us up when her mama's in the shower.  "Hi, Grandma and Papa, I just wanted to tell you what I've been doing!"  I can't wait!
Posted by Webgrandma at 12:41 PM