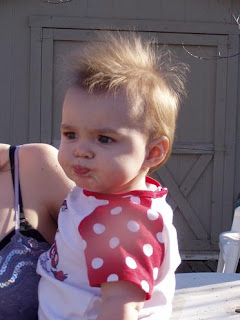 Our oldest granddaughter had what we called "the crazy hair" when she was a baby.  It just stuck up and was so adorable that people had to touch it.

Now it looks like our youngest one is getting the crazy hair too.  Absolutely cute.  And it just demands to be touched.

As it turns out, the crazy hair leads to the gorgeous hair, as seen in our now 6-year-old, so our little one has hope.
Posted by Webgrandma at 6:43 AM No comments:

Toys That Will Last 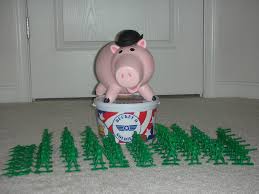 Jacob Maslow at billeater.com has some good advice for buying toys for the long haul.

"As parents, grandparents and caregivers, we can help the children in our lives develop emotionally, socially and academically by putting thought and care into the playthings that we provide them. Simple toys like blocks, dolls and wooden vehicles are timeless classics because they allow children the freedom to use their imagination instead of having the storyline dictated to them by the toy."

Our two older granddaughters and I built a town the other day out of Lincoln Logs, Jenga blocks (which by the way are a really terrific block, as well as a fun game), a farm set, and various rubber and plastic animals.  Buying toys that encourage the imagination, like blocks and building sets, are a terrific way to encourage imaginative play for kids who might otherwise just be interested in computer games.


I think one of the ways we as grandparents can influence our grandkids is by teaching them the kind of creative play we did as kids.  I love the Toy Story movies for this as well - they show kids just using their imagination and thinking up new worlds for their toys to play in.
Posted by Webgrandma at 6:44 AM No comments:

Lisa Carpenter guest blogs at Grandmother Hen this week about grandparenting without a role model.  Her advice for those who didn't have doting Grandmas or Papas is so good:

"Because I don’t have a model of exemplary grandmothering in my life, I buy books written by grandmas, books filled with grandmotherly advice. I read blogs of grandmas excelling at the grandma gig. I nurture relationships with the grandmothers in my circle of friends, look to them as mentors, ask them for advice. And I even home in on fictional grandmother characters in books and movies. I file away for future use the things they do, say and are, that I as a grandma want to do, say and be."

I agree that we need to be intentional about making ourselves the kind of grandparents we'd like to be.  I personally had terrific grandparents here in my hometown, where we used to spend the night probably once a week, drink black cows, and watch Lawrence Welk.  Wonderful times!  I also had a grandma we visited in Wyoming, who taught us kids killer instincts for board games, and how to enjoy a good book.

Papa on the other hand didn't know his grandparents, but has really chosen to give our little girls the kind of grandparenting he would have loved.  So far, it's working out fine.

It was Papa's birthday this past week, and as Lynn and Nicole were discussing his birthday while we were driving to church a couple weeks ago, Papa said that he'd been thinking, and he thought that he wasn't really using his birthday anymore, so he'd like to give it away to the three little girls he loves.  Didn't take them long to agree that this sounded good, but they weren't quite sure what it entailed.

We decided that we'd make a birthday cake, and get presents for "Happy Papa's Birthday" day.  Elaine got hers via Amazon last week, and is loving her soft blocks. They're just right for an almost 9-month-old who loves to put things in her mouth.

Lynn and Nicole got theirs yesterday, and were pretty surprised to get presents unexpectedly.
Lynn is 6 and got a Breyer horse and rider set.  I used to love Breyer horses when I was a kid, and she's really into a horse phase too.  Something about being able to saddle the horse up, and have the girl ride the horse around (along with some trick dog riding, which I'll get to in a second).  At any rate, it was a success too.


The real success, though, was the gift of "cats and dogs" for Nicole.  We've got an inexpensive set of small cats and dogs that all the grandkids so far have loved, but she especially plays with the cats and dogs whenever she comes over.  After much looking, I found a couple of "tubes of animals" that were pretty close to this set, and added a rubbermaid container from Walmart to hold them.  She opened them up, and just lit up.  Her eyes got wide, and she said, "Papa, you got me cats and dogs!"  A little later, she added, "Papa, I like you!"  High praise from a 4-year-old.  Later on, one of the dogs became "Tricky, the Rodeo Dog," who can ride a horse's back for all of about three seconds.  We've decided the horse doesn't really care for a rodeo dog rider.

Here's the link to the cats and dogs, which are an inexpensive way to guarantee a long-remembered "Papa's birthday."

Posted by Webgrandma at 1:52 PM No comments:

Here's a gift I can't resist - it's a 17-DVD set of Scholastic stories, including Good Night Moon, Is Your Mama a Llama, and Good Night Gorilla.  Great reviews, and the price is unbeatable, at least today, September 23.  This is going to be a great set for long van trips to see our Kansas City daughter and her family.

Posted by Webgrandma at 5:33 AM No comments:

This Saturday, September 24, 2011, is Free Museum Day, and lots of museums are free of charge!  One of our personal favorites, Exploration Place, is on the list.  I'd heartily recommend a children's museum outing with the grandkids if you're free.  Here's the listing of Museum Day venues, which you can sort by state.
Posted by Webgrandma at 2:56 PM 1 comment: 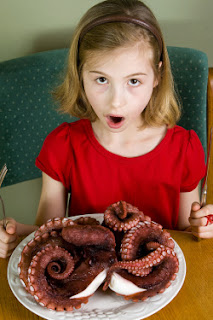 Dr. Janice Pride-Boone writes over at Grandmother Hen about helping picky eaters learn to eat more plant-based foods.  Well, we're carnivores over here at Supergrandkids, but I do love the idea of local, fresh foods, and offering healthy choices to kids as much as possible.  She says:


"Offer food with a history. Know the origin of the food that it is safe and free of added hormones, or chemicals, which serve as flavor enhancers. Go after food that did not travel thousands of miles; buy local and fresh whenever possible. The food tastes better and you can ask the farmer how the food was grown."

This is a goal we've been working toward for a while, mostly because really fresh food tastes better than processed!  Our favorite meat market is an Amish butcher who only provides grass-fed, hormone-free beef.  I don't know if it's the grass or what, but that meat is good, good, good.

However, Lynn and Nicole, our big-girl granddaughters, are huge fans of Velveeta Mac and Cheese, and have now come up with a tradition where Mac and Cheese is their go-to Sunday lunch meal.

We've been trying to offer fruit as well as the cheesy stuff at Sunday lunch for them, with some success, but are still looking for ideas on how to introduce those green veggies.  Lynn will eat a salad every now and then, but if Mac and Cheese is on the menu, that salad isn't going to get much attention.

I have found that having the girls help with food preparation makes them more interested in eating the food.  Maybe we should try making some spaghetti sauce with some pieces of onion, green pepper, and garlic chopped up small.

Any advice on getting picky eaters to eat their veggies would be very welcome to us!

Posted by Webgrandma at 2:19 PM No comments:

A Good Toy for your Techie Toddler

For most of us, our kids, and sometimes even our grandkids, are outpacing us, technology-wise.  For that little crawler or toddler that you love, the one who can already manipulate their parents' iPad, we would recommend the Bright Starts Pretty in Pink Click and Giggle Remote.
Our daughter reviewed this toy for her blog, and her 8-month old just loved it.  Here's a video review from an eight-month-old's perspective:
Pretty darned enjoyable straight out of the box, and she seems to be still finding it interesting.  It's got a good chewing area (important for a teething little one), plus buttons that make a lot of different noises.  This seems like a toy that will have pretty good lasting power, as even the bigger kids seem to enjoy toys that make noise when you press their buttons.  What is it about electronic noises that make kids so happy?

Here's our take:
Durability:  Good - it hasn't fallen apart in the couple of weeks she's had it and these toys seem to be fun for bigger kids too.
Fun Factor:  Good - she's played with it quite a bit.  It's not a total showstopper, but seems pretty interesting to her still.
Wow Factor:  Not up there with a pony, but good for a little one.
Support Me In My Old Age Factor:  Probably not the one toy they'll remember forever as the gift that was that most special birthday or Christmas moment, but a good choice for a "just because" gift, or filler Christmas or birthday gift.

Letter to a New Grandparent

Welcome to grandparenting.  If you're like us, you didn't really expect to be here quite yet, and you may be feeling a little uneasy.  What, me, a grandparent?  Once you get past the idea of it, though, I think you'll find that grandparenting is way better than parenting.  Way.  Here are some things I wish I'd known, going in.


Those people who say grandparenting is so much better than parenting?  They're not lying.  Welcome to the best part of having kids...grandkids.
Posted by Webgrandma at 8:25 AM No comments: