Getting the Christmas Deals 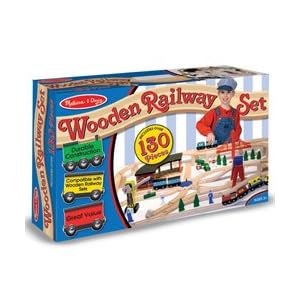 Wow, hard to believe it's already time to start making the Thanksgiving menu and ordering the Christmas toys! Actually, I've already been working on that throughout the year, but have a lot of holes to fill. I usually just pick up small things throughout the year as I see them, and occasionally big gifts too if I see the deals. I've found, though, that the very best deals do come right before Christmas.

This article from DealNews gives some data to support this thesis, and I'd truly recommend waiting until just before Christmas to get the really good stuff.  I think the best deal I've gotten was a 32-piece wooden train set that works with the Thomas The Train cars.  Got it for $9.99, including shipping, from Graveyard Mall, one of those closeout Internet sites that occasionally has some great deals.

I believe we ordered it right around a week and a half before Christmas, but it came in plenty of time, and it's been a hit for quite a while.

It's worth waiting for those deals, and starting about November 1, I'll be monitoring the deal sites (slickdeals.net, dealnews.com, etc.) for the truly good deals.  One word of caution, you'll need to plan on moving fast when you see a deal.  They often sell out quickly, so be ready to buy when the deal comes along.

Happy gift hunting, Grandparents!
Posted by Webgrandma at 7:50 AM